New updates are being added at the bottom of this story…
Original story (published on October 30, 2021) follows:
Last year, Huawei sold off its sub-brand, Honor after the former was blacklisted by the US. The company is now owned and controlled directly by the Chinese government.
While this came as a surprise for many, it meant that Honor could still sell smartphones in the US and make use of Qualcomm’s hardware and Google’s software.
Having said that, in this tracker we’ll be keeping tabs on the upcoming EMUI 12 update for Huawei phones and the Magic UI 5.0 update for Honor smartphones.

Even after the United States banned Huawei back in 2019, the Chinese company still remains one of the largest smartphone manufacturers. Since they cannot use Google’s Android anymore, Huawei has switched to their own operating system known as Harmony OS.
However, Huawei is not yet done with its Android skin, EMUI. The company recently released EMUI 12 bringing in much-needed customizations and UI upgrades.
Huawei said that the new version of EMUI will be pushed to devices in the first half of 2022 with plans to update phones dating back to 2018. The announcement was made during the APAC product launch stream on YouTube on October 28. 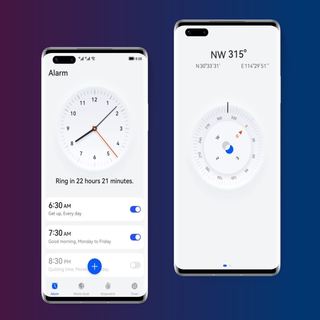 The live stream also revealed which phones would receive the EMUI 12 update. Huawei’s latest UI focuses on a cleaner and minimalistic user interface while the Device+ feature focuses on tightly integrating Huawei products.
Huawei has also overhauled the quick settings and has introduced what it calls ‘Control Panel’ that will allow users to access everything with just a swipe. Another notable feature the upgrade will bring is Huawei’s Distributed File System that will allow devices to share files seamlessly.
On that note, here’s a list of eligible devices from Huawei that will be getting the update to EMUI 12.
– Mate 40 Pro
– P40 Pro+
– P40 Pro
– P40
– Mate Xs
– Mate 30 Pro
– Mate 30
– P30 Pro
– P30
– Mate 20 Pro
– Mate 20 RS
– Mate 20 X 5G
– Mate 20 X
– Mate 20
– P20 Pro
– P20
– Mate 10 Porsche Design
– Mate 10 Pro
– Mate 10
– nova 7
– nova 7 SE
– nova 7i
– nova 5T
– nova 4
– nova 4e
– Y9 Prime 2019
– Y9s
– Y8p
Since EMUI 12 will start rolling out in the first half of 2022, we still have a few months ahead of us before it comes out. Having said that, we will be tracking all EMUI 12 software updates, including security patches in this section.
In the meantime, you can also check our dedicated EMUI 11 tracker to see which devices were updated to the latest version.
IST 1:47 pm: Huawei is said to be starting the EMUI 12 Beta program in Europe and interested persons with eligible devices like the Huawei P40 series and Mate 30 series models can sign up.
IST 04:54 pm: Huawei P30 Lite users might be disappointed to know that there’s still no information regarding the EMUI 12 update for the device as highlighted by a report. Thus, it may take a few weeks or even months for the update to go live.
IST 10:44 am: Huawei has reportedly started EMUI 12 beta testing for Huawei P30 and P30 Pro, however, its currently available in limited markets.
IST 04:50 pm: The Huawei Nova 7i is reportedly receiving the EMUI 12 beta update as version 12.0.0.120 to global models of the device. The software is rolling out to users who registered for the FUT testing program.
IST 11:55 am: Huawei Nova 7 5G is now getting its first EMUI 12 beta update. It comes with EMUI 12 version 12.0.0.123 and an update size of 5.40 GB.
IST 12:36 pm: New reports now have it that Huawei P30 series of devices are now getting their first EMUI 12 beta update.
IST 10:58 am: As Android 12 continues to go mainstream, many OEMs are doubling down on their offers and now, Huawei is reportedly rolling out EMUI 12 beta for Huawei Nova 5T.
Similarly, the Huawei Mate 20 series of devices is receiving the first EMUI 12 beta update.
IST 10:32 am: Huawei is reportedly expanding the Huawei Mate 20 EMUI 12 beta program to include even more users as it works towards the stable release.
10:09 am (IST): Huawei is now rolling out stable EMUI 12 update for Mate 40 Pro users. The update can be identified with the EMUI version 12.0.0.218.
10:08 am (IST): Huawei is now rolling out a stable EMUI 12 update for the users of Huawei Mate 40 Pro, P40, P40 Pro, and Mate 30 Pro. It’s worth noting that the update is currently only available for those who participated in the beta process.
03:04 pm (IST): Stable EMUI 12 update is now rolling out for Huawei P40 series in Serbia. The update can be identified with version 12.0.0.218.
03:05 pm (IST): Huawei is now rolling out the stable EMUI 12 update for the Huawei P40 series in the UK. It can be identified with version 12.0.0.218 and comes with huge size of 5.8 GB.
11:05 pm (IST): Huawei Mate 30 Pro users have begun receiving the stable EMUI 12 update in Europe. The latest update bears the version number 12.0.0.218.
03:38 pm (IST): Huawei is now expanding the EMUI 12 update for the Huawei P40 series in more regions as these smartphones now receive the latest update in Turkey. More on that here.
09:50 am (IST): Huawei Nova 7i is now receiving stable EMUI 12 update. It is currently available for beta testers and comes with software version 12.0.0.220.
NOTE: This table is being updated regularly.
After breaking up with its parent company Huawei, Honor wanted to make a name for itself and distinguish their smartphone UI. And it looks like the Shenzen-based company is finally doing that.
It is rumored that Honor is working on its own Android skin, Magic UI 5.0. The leak comes from the reputed leakster Digital Chat Station. However, it is highly unlikely that the new version will be based on Android 12 since the leak was made back in April.
#DigitalChatStation Huawei’s next new phone runs Hongmeng OS, and the new Honor phone runs MagicUI 5.0 based on the bottom layer of Android 11. Some models before the division of Honor have tested Hongmeng internally, but the latter ones are not good enough.
(Source)
Honor recently released the Honor 50 and the Honor 50 Lite, their first smartphones after splitting up with Huawei. Unsurprisingly, the phones come with Google Mobile Services, allowing Honor to continue from where it left off two years ago.
We’ll add the list of eligible devices or table once Honor confirms the devices that will be getting the update.
In the meantime, you can check out our dedicated Magic UI 4.0 tracker to see which phones got the update.
Featured image source: Huawei
PiunikaWeb started as purely an investigative tech journalism website with main focus on ‘breaking’ or ‘exclusive’ news. In no time, our stories got picked up by the likes of Forbes, Foxnews, Gizmodo, TechCrunch, Engadget, The Verge, Macrumors, and many others. Want to know more about us? Head here.
Previous article
Next article
My fascination with technology and computers goes back to the days of Windows XP. Since then, I have been tinkering with OS, mobile phones, and other things. When I am not working on anything, you will find me enjoying video games on some Discord server.
PiunikaWeb.com is owned and operated by DeepSeaGem Technologies India. Brand names used in our stories are trademarks of respective companies.