The Sun Sets on Patagonia: A Look Back on 2021-22's Adventures Way Down South » Explorersweb – ExplorersWeb

Amid one of the most active Patagonian summer seasons in recent memory, you may have missed a snippet of news or two. Over the last few months, climbers and trekkers were busy establishing new routes, retreading old ones, and linking some together for big enchainments.
Multiple windows of unusually stable weather prevailed for most of the season. Now, the austral summer draws to a close in Patagonia. From the tragic to the triumphant, here’s a rundown of the 2021-22 season highlights.
Initially, it looked like nobody might climb in Patagonia at all in 2021-22. As of October, Chile’s staunch COVID restrictions demanded stringent protocols and prohibited climbing.
Chile started allowing foreign tourists on October 1, but with tight caveats. Proof of vaccination and recent PCR testing, various credential applications, and purchasing health insurance covering COVID to $30,000 all stood in the way.
Ultimately, authorities opened Patagonia to climbing for foreigners by late October, but kept many of the protocols in place.
The final active day of Corrado “Korra” Pesce’s life was January 28, 2022.
Corrado “Korra” Pesce. Photo: Renan Ozturk

No Patagonia story commanded more attention this season than the prolific Italian climber’s death on Cerro Torre. Intensive rescue efforts saved his climbing partner, Tomas Aguilo, but Pesce never made it back down the tower.
On Tuesday, January 25, Italians Matteo Della Bordella, Matteo De Zaiacomo, and David Bacci started up a first ascent bid on the East Face. At the end of their climbing day, they watched Aguilo and Pesce start fixing ropes on their own prospective new route below.
Two days later, the five climbers’ routes coincided on the North Face. There, they resolved to join forces to the summit.
Pesce and Aguilo reached the summit first around 5 pm, with the three other Italians close behind. The group shared a celebratory moment, then Pesce and Aguilo decided to descend.
In the dark, the two made it back down to where they’d left their gear for their summit push and decided to rest before continuing. While they sat with their gear in the early morning of January 28, an avalanche hammered them. Aguilo sustained serious injuries, and Pesce suffered “complete paralysis”.
Della Bordella, De Zaiacomo, and Bacci took an alternate descent and didn’t find out what happened until they reached the ground that night. As soon as they touched down, Della Bordella joined a rescue operation led by Thomas Huber. They found Aguilo about 300m up the tower and brought him down to safety.
Sadly, Pesce was beyond reach, in a location too steep for a helicopter pickoff and bad weather incoming.
Della Bordella, De Zaiacomo, and Bacci called their route Brothers In Arms (7a A2, 90°, 1,200m).
“Brothers in Arms is not just a dream,” Della Bordella wrote on Instagram, “but a reason for living, something that can give meaning to our lives.”

The 90km traverse around the Hielo Continental (or Southern Patagonia Ice Field), the second-largest icefield in the world outside the polar regions, can take six to eight days. Most teams don’t check in to the finish line in El Chaltén, Argentina until at least a day after starting at the Rio Eléctrico bridge to the north. 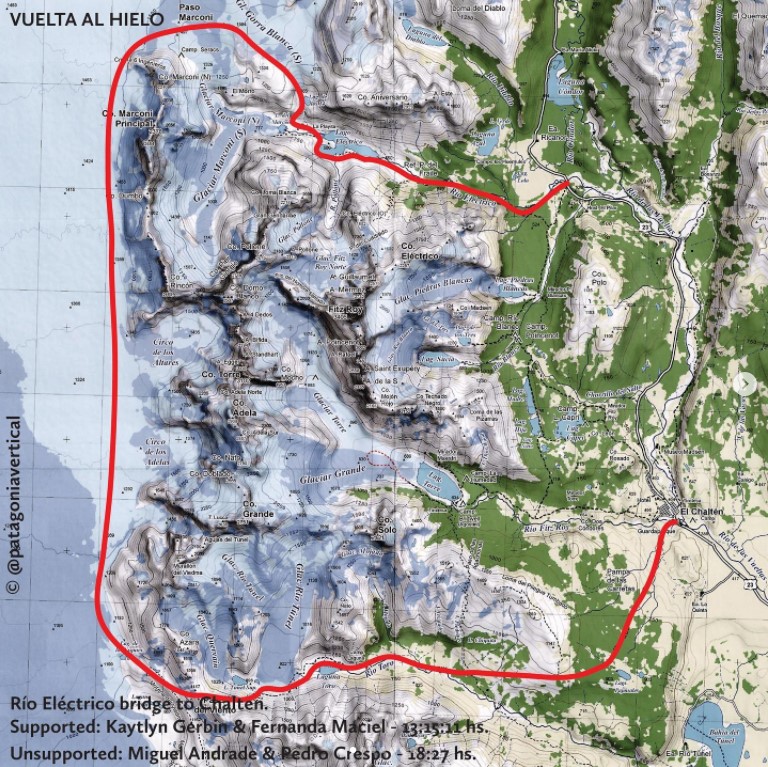 Fernanda Maciela and Kaytlyn Gerbin did it on a February day in just 13 hours and 15 minutes. At the time, the mark was the “fastest known time” (or FKT) by nearly seven hours.
Maciela had attempted the route once before, more than a decade ago. This summer, she traveled back to Patagonia to complete it with North Face teammate Kaytlyn Gerbin.
Photo: Maciela and Gerbin

“The traverse is brutal and challenging, and it will take a perfect window to be able to complete it with weather and logistics aligned,” Maciela said.
Tyrolean traverses, crevasse-riddled ice fields, and low-grade mountaineering characterize the route. The backdrop for the long, namesake Hielo Continental ice field hike is none other than the Fitz Roy Massif.
“The terrain here is wild. Running together on a rope while jumping over thousands of crevasses was an unbelievable experience,” Gerbin said. “We were fortunate to have good conditions and a beautiful day after so many bad weather days here in Patagonia.”
Photo: Maciela and Gerbin

Shortly after Maciela and Gerbin finished, Jenny Abegg, an editor on ExWeb’s sister publication Switchback Travel, established a female FKT of the closed-loop route (El Chalten to El Chalten), traveling solo, with a time of about 15:30.
Sebastian Pelletti and Pepo Jurado enjoyed twofold success in January, with the first ascent of the Torres del Paines’ last unclimbed peak and a new route elsewhere in the Torres.
Vacaciones Metamórficas (600m, 5.11- or 6b+/c) tops out the previously unclimbed Cuerno Este at over 2,000m. Climbed with Romano Marcotti, the route touches the final peak in a region that saw summit climbs as early as the 1930s.
On ‘Vacaciones Metamorficas’.

Apparently unquenched, Pelletti and Jurado started up a nearby formation right after they got back to the ground. Cuarzo Menguante (5.11+ A2, 700m) takes a long crack system up La Hoja (“The Blade” in English).
‘Cuarzo Menguante’.

The line, following distinct features, was straightforward; the climbing was not. The team shivered through an unplanned bivy on the way up, then watched an “eternal sunrise” in the morning before summiting.
They performed a little stewardship on their way down, rebolting the anchors on the neighboring Anduril.
Climbing in Patagonia can be either nightmarish in its complexity or beautiful in its simplicity. Dos Hermanos (5.11+ A0, 20 pitches) fits the latter bill and looks destined to become a classic. 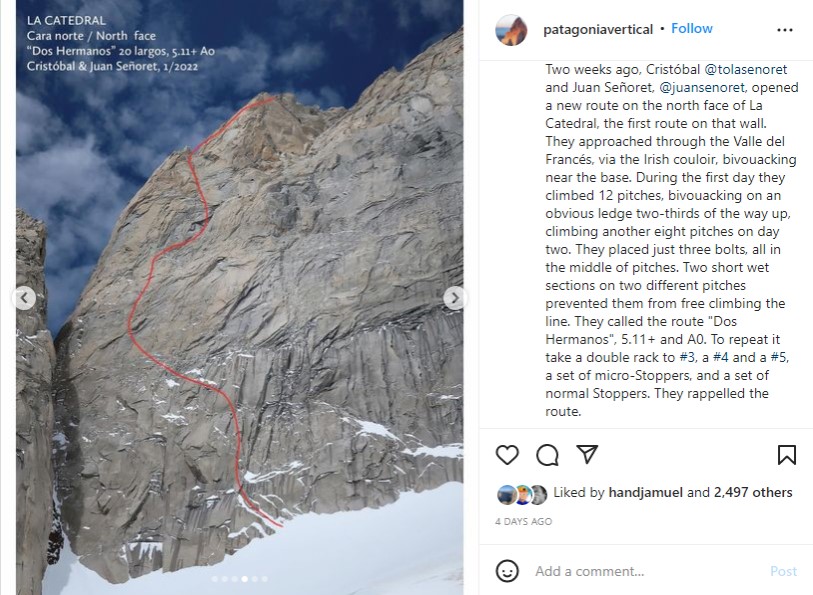 The route, by Cristobal and Juan Senoret, has a total of three bolts in 20 pitches on what looks like stellar trad climbing. To climb it, bring a standard double rack of cams, a full set of stoppers, and two bigger cams. To get back down, rappel the route.
Dos Hermanos sways back and forth up a huge sunny shield on La Catedral, and a possible bivy on an “obvious ledge” sits conveniently two-thirds of the way up.
The summit facilitates a panoramic view of the Valle del Francés below.
What more could a climber ask for?
The La Catedral summit.

The 500 previously unclimbed metres take the ramp feature at climber’s left. It shares its last pitches with a 1987 route climbed by Austrians Hans Barnthaler and Ewald Lidl.
El Zorro y La Rosa tops out at Saint-Exupéry’s south summit, Punta Cristina. To tag the summit proper, future climbers would need to do a 50m descent and a few more pitches.
The team also said, enticingly, that the route could easily go free.
First ascensionists Grattori, Degregori, and Odell.
Priti and Jeff Wright nabbed three peaks over four days in Patagonia without touching the ground.
The team’s Torre Group enchainment linked up Aguja Standhardt to Punta Heron to Torre Egger. 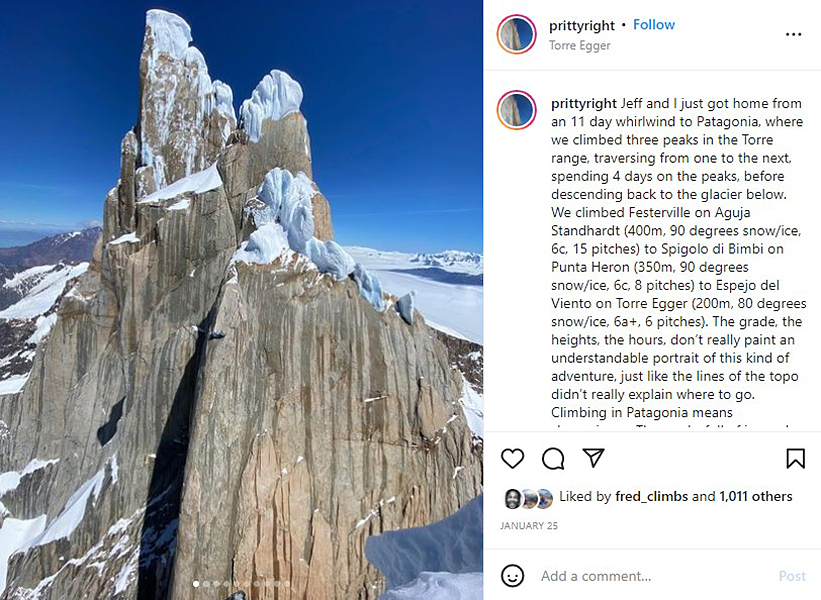 To do it, the pair ticked Festerville (400m, 90 degrees snow/ice, 6c, 15 pitches) on Standhardt; Spigolo di Bimbi (350m, 90 degrees snow/ice, 6c, 8 pitches) on Punta Heron; and Espejo del Viento (200m, 80 degrees snow/ice, 6a+, 6 pitches) on Torre Egger.
“Climbing in Patagonia means shenanigans,” Priti Wright wrote. “The cracks full of ice and loose blocks must be climbed, wet slab traversed, boots and crampons come on and off, packs must be worn or hauled, rappels made, gear left, weather analyzed, snow melted, bivy ledges flattened, and the way must be found.”
Unofficially, Wright is just the third woman to summit Torre Egger.
On the enchainment.

Last September, Natalia Martinez and Camilo Rada announced a unique and ongoing Patagonia mapping project. Seeking the interpretive history of the region through topography, the two decided to take the road less traveled through Patagonia to create what they call “living maps”.
The documents aim to consolidate “the collective imaginings, histories, and geographies of the mountains of Patagonia into maps.”
“To us, discovery is not a single event documented in history books,” they wrote in an article for Alpinist. “It’s a process, a living adventure that we can all be a part of.”
The authors Camilo Rada and Natalia Martinez in their element. Photo: Camilo Rada, UNCHARTED project

Mapped areas include the Cordillera Darwin, Cordillera de Sarmiento, Peninsula Munoz Gamero and the Northern Patagonian Icefield. “Easily” a third of the summits in the areas, they say, are untouched.
Canadian Quentin Roberts notched a solo on Torre Egger solo in early January. Because the 2,685m tower sits next to Cerro Torre, Roberts shared a moment of camaraderie with Pesce’s Italian team at their respective summits. The climbers reported they could shout back and forth to each other across the expanse.

Roberts took advantage of a very good weather window to tick the first Torre Egger solo in years. Colin Haley first soloed it in January 2016. Later, Marc-Andre Leclerc soloed it in winter. The film The Alpinist follows Leclerc’s ascent.
Robert “Bertl” Grasegger died in early January when an avalanche swept him off Aguja Guillaumet. The experienced German climbing guide was 29.
Details on the incident are sparse, but Patagonia Vertical wrote a thorough tribute to the young climber on Instagram. 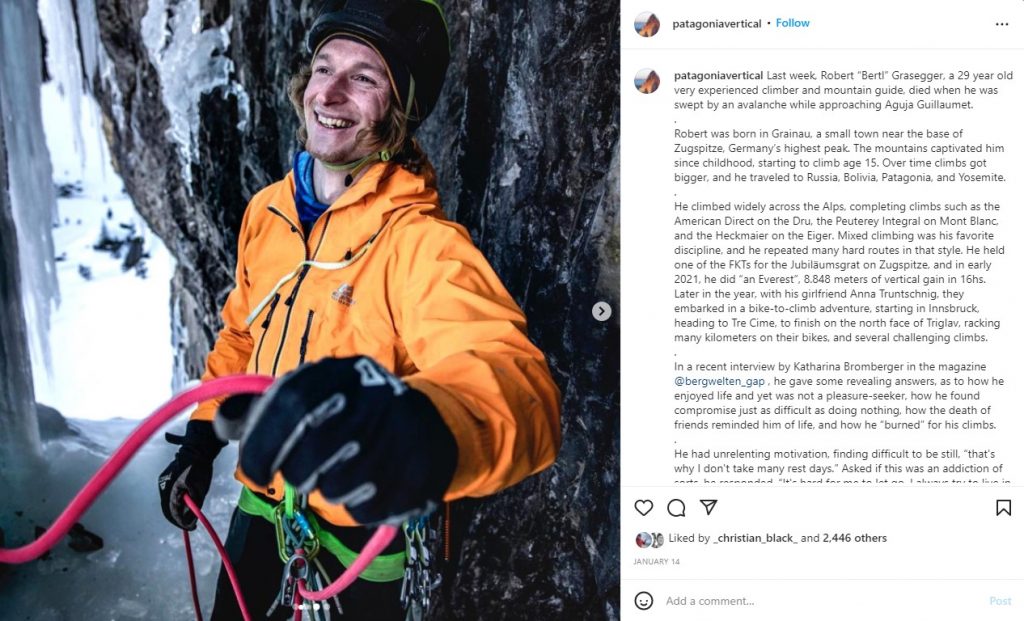 In a season of outstanding weather windows, especially by Patagonian standards, two Slovakians hit hard luck. Mother nature threw a fusillade at Ondrej Huserka and Jozef Kristoffy on Aguja Desmochada for two days in January. But the pair held on for a gritty first ascent.
Photo: Ondrej Huserka

Pain and Gain goes at 7a+ C1. If you’ve ever climbed those grades, you know that climbing them in “extreme heat, terrible cold, wind, ice, [and] snow” would be desperate at best.
In one outing, Chileans Raimundo De Andraca, Javier Galleani, and Nicolas Valderrama became the first people to summit 2,300m Cerro Pinuer in winter, and the first to ski down.
The ski descent line from Cerro Pinuer summit. Photo: Raimundo De Andraca

Pinuer squats in the remote Valle Exploradores. First summited just three years ago by Javier Galleani Calderon and Luis Torres, it’s little-explored.
De Andraca, Galleani, and Valderrama took a clean line down the mountain’s eastern slope. They succeeded in the late Patagonian winter, on September 2.
You can find galleries of the mountaineers’ adventure on their social media accounts: @raideandraca, @javiergalleani, and @andes.che.
Roger Schaeli, Mario Heller, and Pablo Pontoriero snagged some of this season’s best Patagonia footage when they flew off Cerro Torre in mid-January. 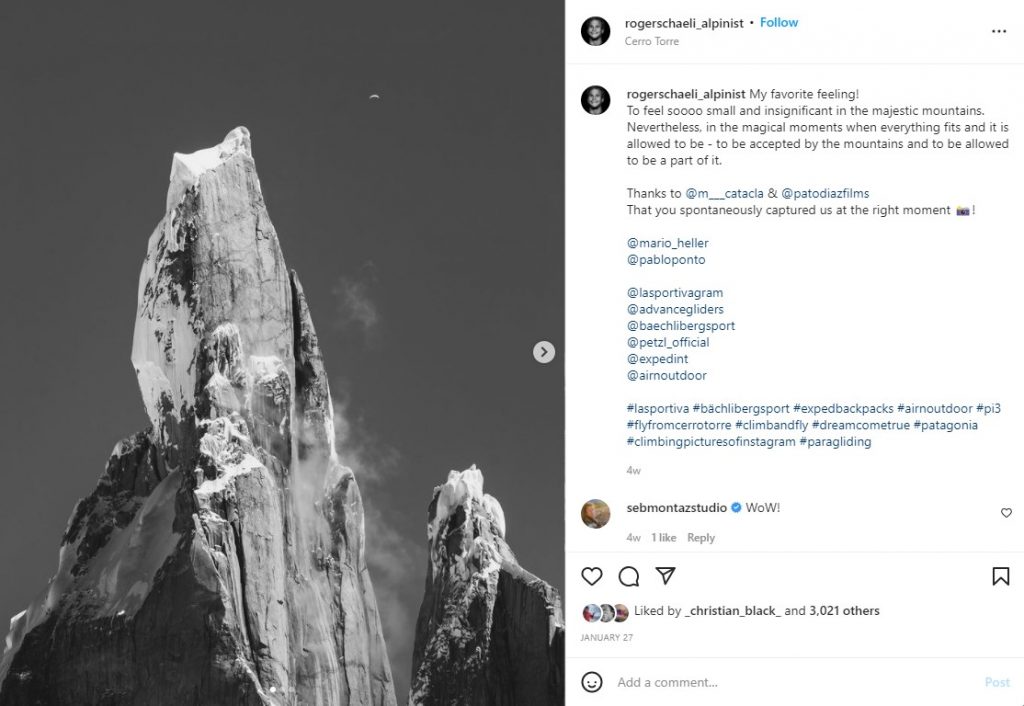 The team climbed the tower via the popular Ragni route. Schaeli reported that unexpectedly harsh weather slowed them down on the ascent and forced a bivy below the summit mushroom.
But it all came out in the wash of an ensuing bluebird day and ideal flying conditions. Check out some of the most unique Patagonia imagery we’ve seen on Schaeli, Heller, or Pontoriero’s Instagram accounts.
Sam Anderson Sam Anderson takes any writing assignments he can talk his way into while intermittently traveling the American West and Mexico in search of margaritas — er, adventure. He parlayed a decade of roving trade work into a life of fair-weather rock climbing and truck dwelling before (to his parents’ evident relief) finding a way to put his BA in English to use. Sam loves animals, sleeping outdoors, campfire refreshments and a good story.