Bringing you yesterday’s news from Japan and Asia, today. 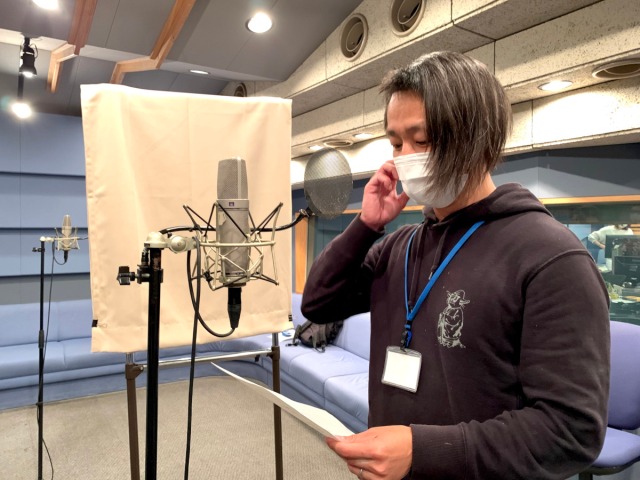 P.K. takes us behind the scenes and into the recording studio as he plays two characters in the latest film.

He made his debut as a voice actor in the 2017 film Spider-Man: Homecoming and appeared in 2019’s Spider-Man: Far From Home. Now, he’s in the latest film, Spider-Man: No Way Home. Do you know what his name is?
We know him, you know him. It’s our beloved reporter P.K. Sanjun!
Sure, his lines in all three films may amount to less than ten seconds of screen time, but how many people can say they’ve played four characters in the Marvel Universe?
That’s right — in Spider-Man: Homecoming, P.K. played “Man in white top sitting outside a sandwich shop where Peter is on his way home from school” and his line was:
“Yo“.
In the U.S. release, Peter runs across the road and says, “Hey, what’s up?” to the man in white before he enters the sandwich shop, and the man in white replies, “Hey, man.” However, in the Japanese dub, the line is simply “Yo”, and it took P.K. an hour and a half to get the word right for the recording.
▼ When you’re saying “Yo” to Spider-Man’s Peter Parker in the movie, you’ve got to get it right.

P.K. reckons he acted out his “Yo” more than 20 times before it got the approval of the director. However, his one-word line in the film proved to be so powerful it moved critics and movie execs to tears…at least that’s what P.K. likes to think when he listens to his performance on screen.
Still, his voice acting mustn’t have been too bad, because he was re-hired to play another character in Spider-Man: Far From Home a couple of years later. For this film, P.K. played the Italian flower seller who runs up the stairs after Peter Parker and MJ in Venice, holding a rose out to them and saying: “Signorina. Signorina, German? American? A rose for you.”
In Japanese, P.K.’s line was: “Signorina. Signorina, Doitsujin? Amerikajin? Ohana dou?“, which translates to “Signorina. Signorina, German? American? How about a flower?”
▼ Look at the nerves on P.K.’s face as he attempts to nail his performance!

Again, another inspiring performance that led to P.K. being re-hired for the latest instalment in the franchise, Spider-Man: No Way Home. Due to be released in Japan on 7 January, you’ll want to keep an eye out for two characters this time, the first being “Man in crowd who knows the true identity of Spider-Man” and “Enthusiastic chubby extra with glasses“.
▼ Some might say P.K. now displays more range than Tom Holland, who essentially plays only one character and an alter ego in the film.

In his first role as “Man in crowd who knows the true identity of Spider-Man“, P.K.’s line is “Oi, aitsu ja nai ka?”, which translates to “Hey, isn’t he…?” This time, P.K.’s character appears in the first one-to-two minutes of the film, so he was tasked with “grabbing” the attention of the audience as the story opens.
▼ All jokes aside, this voice acting is serious stuff.

P.K.’s second character, “Enthusiastic chubby extra with glasses“, appears when Peter and the gang are going to school, and his line here is: “MJ to kisu shite!”, which translates to “Kiss MJ!“.
In movies, the “kissing scene” is often a highlight of the story, and P.K’s character is pretty bold in trying to make that happen. Who knows — maybe that chubby extra will soon become a main character and then P.K. will join the ranks of more esteemed voice actors, or even Hollywood stars, leaving us all for dust.
We can’t blame P.K. for dreaming big, especially when he got to read his “Kiss MJ!” line alongside Oolongta Yoshida, who voices the character of Ned, Peter’s best friend in the movie.

Yoshida even helped to coach P.K. on some of the finer details of voice-acting, so maybe P.K. really does have a bright future ahead of him in the voice industry. He’ll have to work on getting over his nerves first, though, because P.K. says he got so nervous in the studio that his legs were shaking, his stomach was in knots and he felt like like he might throw up.

Still, P.K. managed to cut his recording session down to around an hour, and he only had to do a handful of retakes, so his nerves must’ve helped him deliver a good performance. He gives full credit for any of his success to all the staff, including Oolongta and the director, who, despite being absolute professionals in the industry, were happy to guide our bumbling, non-professional, self-professed “third-rate writer” through his vocal performances.
▼ P.K. is incredibly grateful and thankful to all the people involved in the Japanese voice dub for one of his favourite franchises.

▼ The kindest professionals in the industry!

P.K. describes himself as a “childish voice actor” at best — even though he previously had a part in the Japanese dub of the 2018 film Venom — but he was serious about delivering a good performance and putting all his energy into the characters, however minor they might be.

▼ We know it’s hard to believe, but yes — our reporter really is a part of this world.

So if you ever get a chance to listen to the Japanese dub for the most recent Spider-Man movies, be sure to keep an ear out for P.K. You can keep an eye out for him too, as his name is listed in the credits of the movies in Japanese as “P.K.サンジュン“.
The small parts he played in the Spider-Man dub are an experience P.K. will treasure forever, and one day, when his five-year-old daughter grows up, he hopes she’ll realise that her dad can do more than just eat pork buns on the street — he can also battle through nerves to make his wildest Spidey dreams come true.
Photos ©SoraNews24
● Want to hear about SoraNews24’s latest articles as soon as they’re published? Follow us on Facebook and Twitter!
[ Read in Japanese ]
Follow SoraNews24
© SoraNews24 -Japan News- / SOCIO CORPORATION